Rent Prices Grow at Slowest Pace in a Decade

Rent Prices Grow at Slowest Pace in a Decade: Rents in February had notched their highest increase in four years before the pandemic hit.
Posted by Jim Cheney, "Your Rincon Valley Realtor" at 3:03 PM No comments:

Stand Up Paddleboarding in Sonoma County

Places to Paddleboard in Sonoma County

This super convenient lake is located in Fountaingrove just minutes from US 101.  The lake is 33 acres and has a cement boat ramp.  The lake rarely has boaters on it,  however, it is popular with fishermen who either use inflatables to fish near the shore or from the shore.

Johnson's Beach is located in downtown Guerneville.  The beach is mostly private but there is an ally through the beach area that is accessible FOR FREE to the public.  When you arrive at the beach there will be a security guard who will ask you if you have reservations.  if you want to put your paddleboard in the river for free without using the resort's amenities (chairs, umbrellas, bathrooms, etc) you just need to state that you are "putting your boat in the river only, and not staying at the resort.  You can then drive down to the beach, unload your boat, then drive back into Guerneville (1 block) and find free parking.  Once you launch your boat you are free to paddle up or downstream as far as you feel!
There is a "Summer dam" at Johnson's Beach so decide if you want to paddle upstream from the dam, or downstream.  Either is fine.  The dam makes paddling upstream very easy.  The river is like a lake with very little current.  I like to paddle upstream till I get tired, then paddle back stopping at the Stumptown brewery for lunch and a beer.  You can safely leave your boat on the shore, and walk up the embankment to the restaurant.  I've never had a problem with my equipment being bothered, nor have I heard of anybody having anything messed with.  That being said, I would not leave my iPhone or anything of value on the boat, but the boat itself should be fine.
Upside:
Downside:
Dogs: on leash- yes
Swimming: yes
Parking: free where you can find it
Fishing: yes

Hudeman slough is a wetland tidal waterway fed from the San Pablo Bay.  It is located in the Carneros wine region.  The slough is very pretty, natural, and a great place to see a variety of birds.
The boat launch is owned by the State of California but is maintained by Sonoma County Regional Parks.  The ramp and parking lot are free to use.
This is a very interesting place to paddle.  I recommend paddling at or near high tide.  The slough is very deep and in fact, was a major shipping area and able to accommodate Paddleboats during the turn of the century.  Putting in at the boat ramp during low tide is a muddy, mucky mess.  Here is a link to check the tide: Tide chart
I also recommend you check the weather. The area is typically windy which when coupled with the tide, can make it challenging to navigate the sloughs.  You should also bring a map, or a map app so that you don't get lost in sloughs.
Upside:
Beautiful, unusual, great waterfowl viewing
Downside:
Wind and tides
For more information about Hudeman Slough visit this site: Slough

Posted by Jim Cheney, "Your Rincon Valley Realtor" at 9:09 AM 2 comments:

Email ThisBlogThis!Share to TwitterShare to FacebookShare to Pinterest
Labels: Rincon Valley Parks, Things to do

61% of Americans Say Now Is a Good Time to Buy

61% of Americans Say Now Is a Good Time to Buy: In particular, the share of renters feeling optimistic about purchasing a home is at its highest level in five years, a Fannie Mae survey says. 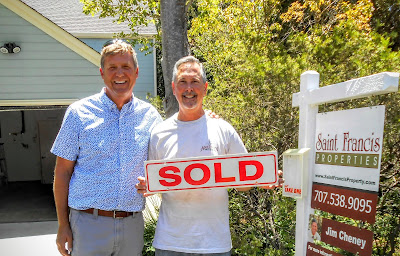 The share of renters who say now is a good time to purchase a home is at its highest level in five years, according to the latest reading from Fannie Mae’s Home Purchase Sentiment Index. Homeowners are also starting to feel more optimistic about selling.
Four of six components that the index measures increased in June over May. But the index, which measures American sentiment about the housing market, still remains down by 15 points over the last few months. In April, the index had reached a record low as the COVID-19 pandemic ignited in the U.S.
“A second month of improvement in June allowed the HPSI to regain some of the sharp losses in optimism observed in March and April,” says Doug Duncan, Fannie Mae’s chief economist.
The index suggests more favorable conditions for first-time homebuyers, which is consistent with a recent rebound in home purchase activity and applications, Duncan adds.
Homeowners sense opportunity as well. “Homeowners seem to have taken note of the resulting lack of housing supply, with an increased share saying it’s a good time to sell a home,” Duncan says. “However, this activity may cool again in the coming months, depending on the extent to which it can be attributed to consumers having chosen to delay or to accelerate home buying plans due to the pandemic.”
Fannie Mae surveyed about 1,000 Americans and found elevated concerns about job security. “We believe the continuing uncertainty regarding the coronavirus’ containment suggests an uneven and potentially volatile course toward economic recovery,” Duncan says.
Here are more results from June’s survey:
Posted by Jim Cheney, "Your Rincon Valley Realtor" at 1:14 PM No comments: